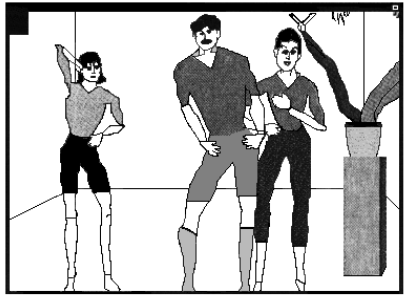 It’s taken 30 years for Harold Cohen to teach his student how to paint, but he’s not struggling with a slow learner. Cohen’s student, AARON, is a computer program. Cohen has “taught” AARON guidelines on composition and color. In the past, AARON has used those rules to paint large art works for major museums such as London’s Tate Modern and the San Francisco Museum of Modern Art. Now a company aims to bring AARON to computer monitors across the land as software ($19.95; available from www.KurzweilCyberart.com) for Windows PCs. After you download the program, AARON draws original pictures on your desktop, then fills them in with brushstrokes of color. You can also e-mail AARON’s creations to friends − AARON will redraw its art work on their computers. And unlike temperamental humans, AARON never needs “inspiration” − leave it on as a screen saver and the program churns out drawing after drawing. But, says Cohen, AARON will never draw the same picture twice.

According to the passage, AARON is a computer program that

has taught students how to paint.

can paint and draw.

has been available for 30 years.

has been bought by some museums.